As a complete contrast to yesterday, today was bright and sunny with a slight nip in the air! We took advantage of the fine spring weather and drove through Freising in Bavaria to the oldest brewery in the world, Weihenstephan, a brewery which has been in operation since 1040. Weihenstephan is also a branch of the Munich University of Technology for Life Sciences and attracts international students for learning to brew beer.

Our next Freising destination is the Marienplatz in the town centre, which boasts an old Town Hall (Rathaus) building and is backdropped by the Freising St. George’s Church Bell Tower.

We head to the best ice cream in Freising along the Obere Hauptstrasse and walk the streets of Rolf’s old stomping ground. We decide to hit the back roads for a while which take us through rolling, green countryside and through picturesque Bavarian villages. Returning to Freising we make one last stop for a photo of another of the world’s oldest breweries, the Hofbrauhaus Freising brewing since 1160 We have been back in Freising in Bavaria (Southern Germany) for a few days, enjoying some time with family before heading off on the rest of our photo shoot soon.

Although today has dawned wet and cold, we set off to the Saturday Farmers Market in downtown Freising. Although there are no vehicles allowed through the centre of town during market day, the people are definitely on a mission as they walk briskly from one stall to the next. There are even more people arriving by the minute on bicycle.

From early Saturday afternoon until Monday morning, the shops in Germany are closed so every man and his dog is out to catch up on last minute shopping of fresh produce, meat, fish, and flowers (whatever you like).

This day happens to be a public holiday (May 1st) here in Germany so the markets were busier than usual because of the long weekend!

This bird has found a great nesting place to raise its single chick here in Freising, Germany. Seen on the patio, sheltered under the eaves of the house. Neither bird minds sharing the space with humans and remain in their nest even when there’s a crowd.

We figure the only thing she didn’t count on was the amount of space needed once her brood hatched, you can see the chicks head poking out the side of the nest!

black bird with chick The bird is an Amsel or Black Bird, Turdus merula. The males of the species have black plumage with a bright yellow beak, while the females plumage is brown with faint spots on the breast. Black birds have one of the most beautiful song although they are known to screech at times. 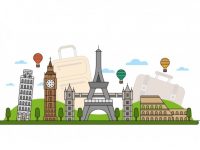 Europe Tour Package : Get The Best In Your Budget

Going on a trip in holidays and having a nice time in your vacation is something that everyone dreams of. Going to Europe for vacation…read more →